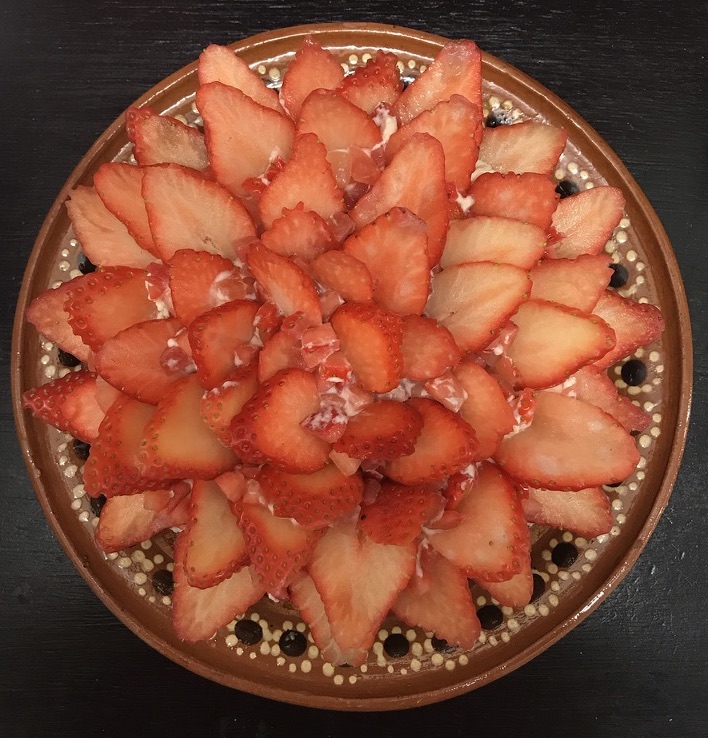 Recipe Of The Month

During early lockdown, my timeline on social media was loaded with sourdough starters and banana bread loaves. It was everywhere! People were stuck at home, unable to go anywhere, so they turned to the kitchen to find comfort and reassurance. Ireland ran out of flour and yeast was like gold dust! Seriously, the first thing I cooked were chocolate, chilli, booze laced cookies! I called them dooms day cookies! I think I cooked more comfort food those first few weeks than I did in my entire time in Ireland!

After about 3 weeks, I sort of went back to normal, but I remember seeing the prominent Irish food critic Lucinda O'Sullivan posting on twitter two almost rotten bananas and asking for anything other than banana bread. My answer was simple: ice-cream! Ever since I was a little kid, I have been fascinated by ice-cream. When you think about it, it is magic, flavoursome, evocative, sentimental, daring, adventurous, but most of all, it is bloody delicious!

I can basically make ice-cream out of almost anything and contrary to what many people think, it is relatively easy to make. When it comes to flavours, the world is your oyster. A couple of days after, I myself found a bottle of double cream and three overly ripped bananas in my kitchen, and naturally, I went for it. Here are the results, hope you like this recipe as much as I do!

I make my ice-cream with an ice-cream machine, but you don't have to, I'll give you instructions in the steps to make it without one; however, let me play the devil's advocate for one second and tell you it is totally worth it to get one. The first ice-cream machine I bought was the Kenwood Ice-Cream maker from Argos for 30 quid, and believe you me, it is the best ice-cream maker I've ever had, compact and powerful and it lasted for years; the only drawback is that you have to pre-freeze the bowl, but I always kept the bowl in the freezer so when I fancy ice-cream, the bowl was ready. Eventually, I bought a more professional machine that had a condenser so no need to pre-freeze the bowl, but believe you me, until last week, I still had my Kenwood ice-cream maker as backup; during lockdown, I decided to send it to a home with two little boys who love making ice-cream and now, they get to discover the joys of watching it churn a couple of simple wholesome ingredients into summer bliss.

This recipe has been a long time on the making. I've had a tin of guayabas in syrup in the pantry since last year as I wanted to develop a recipe to show people in Ireland how delicious they are, something tasty and easy enough that showcases this gorgeous tropical fruit that has a ton of vitamin C. So this was on the back of my mind for a while. As you can imagine, life has been incredibly busy lately. While most people are at home during the lockdown, myself and Alan are both working longer hours than we ever did, he has been switching all his academic work into online lectures that are accessible to his students around the world, while I've been working 24/7 at Picado.

While all the classes at Picado had to be cancelled and the shop closed to the public, we are still working the online shop, which has seen a huge increase in orders and has me working 7 days weeks for the past month and a half. A couple of weeks ago, I decided to make sure to take Sundays off as I was wearing myself sick with worry and too much work. Running a small business at this crazy times is such a stressful thing. Noone knows what's going to happen, or what the future will look like. All big plans abandoned and switching to survival mode.

Although I'm not physically working the shop on Sundays, I still have a ton of admin work to do, but I'm making sure Sundays are also used to tend to my raise bed (we're learning to grow food in our back garden), and I also do some cooking and some writing. It relaxes me and it adds an anchor to my day off. So yesterday I looked again into the cover and saw the tin of guayabas and I immediately set to make this. It's a very popular dessert in Mexico and I love its silky texture, a cross between a flan and a cheesecake.

Guayabas, or Guavas as they're known in many parts of the world, are native to Mexico and some parts of central and south America; they are fragrant, tropical fruit, with a sweet and tangy pulp and tons of hard seeds. The variety I grew up eating at home had yellow skin and a very pale yellow pulp. In Mexico we make juice, candies, Christmas punch, or we eat them just as a fruit. The pulp makes amazing flavour for chilli based sweets and guayaba pate is just amazing. This flan, however, is my favourite way to eat them. Enjoy the recipe!

Two weeks ago (was it really only two weeks?!), life as we knew it was sent packing and most people were sent home for a series of measures to prevent the spread of the deadly COVID19 virus that's causing havoc all over the world. For a couple of days, I went into free-fall and full on panic, thinking what was going to happen to my business, my staff and myself. That day, we cancelled all classes for the foreseeable future, my anxiety levels went through the roof.

I found myself with no late nights that weekend and with far too much time in my hands and a heart full of doom and gloom; unable to control anything that was going on around me, I turned to the kitchen to calm myself down. The kitchen is my safe space. When I get anxious, I bake; it calms me down and so I took to the kitchen to organise my pantry and see if I could make something tasty. I found a large quantity of chocolate chips and a giant jar of pecan nuts and because pecan nuts don't stay fresh for long, I decided to make a few cookies to use them up.

I took a basic pecan and chocolate chip cookie recipe and make a few tweaks on it to produce what I now called my Doomsday cookies! They have Mezcal, not vanilla essence; smokey chipotle chillies, instead of cinnamon & nutmeg; Mexican piloncillo, as suppose to brown sugar. The result was spectacular! These cookies are smokey as the chipotle chilli powder and the mezcal are both smoked. The chilli gives it just a hint of heat and it adds a great savoury twang to a rather sweet cookie otherwise. The Piloncillo has so many layer of flavour is unreal.

We all love them and have made them three times already in the two weeks since I tried the recipe for the first time! - We live in scary and uncertain times and I hope this recipe brings some much needed cheer to your home. Stay safe and let's all do our bit to flatten the curve and stop the spread! Together we can do it! - When all this is over, I'm going to make a large batch of these and gift them to every frontline worker in the health service that I know. They deserve them much more than I do.

Every year, I would promise myself I would do some Irish take on a Mexican dish but I never seem to have time to do it. I also always get stuck in wanting to do something green... which I realise now, is not the best approach. This year, I started thinking about this early February and while contemplating the makings of a green mole while sitting down at my kitchen table, I saw a bottle of Bailey's on the wine rack over the fridge... I love its sweet and creamy deliciousness and I love boozy desserts. This got me thinking... and since I quite like Bailey's, I thought... wait a minute... wait a minute... Bailey's is just a brand of Irish Cream, and Tres Leches being my all time favourite dessert, I thought, what about replacing one of the Leches by its equivalent of Irish Cream?! - this got my heart racing and my brain into action.

I quickly sketched a couple of possible recipe alternatives and before you knew it, I had done a version of this cake on both: cupcakes and a full cake. It was so delicious I made it again for St. Patrick's Day and today - I know it is the day after but cut me a break please! - I'm sharing it with you. So here it is, my version of a Tres Leches Cake for Paddy's Weekend! If you end up making this into cupcakes, use the tinfoil type of cupcake casings and chop the fruit and put it underneath the cream, so you have a nice layer cupcake.

January is always a lean month, a month in which we choose to spend eating whatever stuff is in the kitchen. We waste far too much food, so it is a great way to clear the covers and used up all those things we bought during the year and never ate. Take the freezer, for example, I don't know about yours, but my freezer is always full of food, things I bought I put there and then never quite found time or occasion to eat them or cook them. Every time I open the freezer, I feel super guilty that there is so much food there! There's also this particular couple of covers, where most of my dry goods go, where you'll find pasta, beans, flours, condiments, spices, sauces, dried chillies, tinned foods and all sorts of baking ingredients that is always jam packed with stuff. Most of these things have a shelf life and experience has thought me that if you don't use them within the year or so, they're most likely to go to waste.

So every January, almost religiously, I buy no groceries, other than fresh dairy and eggs, and I challenge myself to use whatever I have. It's a fun challenge that keeps things delicious and makes the dreaded January wait for payday a lot easier. This year I found all sorts of wonders in my cover, but towards the end of the month, a couple of tins of black beans appeared to the very back. This coincided with one of my cooking segments with Ireland AM on Virgine Media One, so I decided to share this bean recipe with them. You can catch the segment on the player and through this link if you want to watch it.

This is one of my favourite ways to eat beans and a perfect party pleaser. This dip is easy to make and very flavoursome, it keeps well in the fridge for up to a week and it freezes well. You can make in advance and re-heat in the microwave.