I must confess that one aspect of Irish life that I truly love is the fact that Irish people, in general, have a complete disregard for celebrities. Many world-famous celebrities choose to spend their holiday time in Ireland because nobody bothers them. They can go out, like a regular person and enjoy themselves. It is like if Irish people go out of their way to ignore celebrity status... such a cool thing. Some of that 'coolness' has rubbed off and I also do the cool thing... I have never understood how people can go into hysterics at the sight of another human being. Don't take me wrong, I'd happily and discreetly stare at George Clooney on the street, but I would never dream of interrupting a dinner or anything to ask for an autograph. I am, after all these years, a little Irish too, so I must remain cool. Over the past weekend, all that 'coolness' went to hell and I was transformed into a weak-kneed, teary eye, (inner) screamer, starstruck fan, for the most unlikely of characters. I completely lost my coolness when I finally met my ultimate food hero, the most extraordinary woman that is Diana Kennedy at the Ballymaloe Literary Festival 2014.

I have been an admirer of Doña Diana for over a decade. I have all her books, I've read every magazine, every internet article and, most importantly, I have used her books many, many times. They are an incredible source of knowledge, they can be used as inspiration, as reference and as a learning tool. A British citizen by birth, Diana Kennedy was born with far too much spirit for a woman of her time. She left Britain in 1953 for Canada because, in her own words, "somebody said to me - why don't you go to Canada?- and as you know, when somebody says -why don't you- I do!".

From Canada she traveled through the Caribean Islands, landing in Haiti as a revolution was just breaking: 'The first man I saw was the man who became my husband'- she refers to Paul Kennedy, the New York Times correspondent who was leaving Haiti for the safer shores of Mexico; Diana followed him. She arrived in 1957 in Mexico and her love affair with the country and food continues until today. She lived in Mexico until her husband Paul was diagnosed with cancer. They returned to the US and lived in New York so Paul could get treatment; sadly, he passed away a year later and Diana was left alone and with little or no money.

She was encouraged by an editor friend of hers to give Mexican cooking classes in her apartment and thus she found a source of funding for her many travels back to Mexico. Eventually, she moved back to Mexico, to the state of Michoacan, where she bought land (to the amusement of the local men) and settled in what she called 'Quinta Diana'. She has spent nearly 60 years researching and documenting Mexican recipes. She has travelled extensively through the countryside in Mexico gathering recipes and knowledge that she then meticulously catalogued and preserved.

She also mananged to turn Quinta Diana into a sustainable ranch, living off the grid, growing her own food and tendering to her own animals for over 35 years, way before sustainability and green issues were trendy. Her eleven books are a testament to her enourmous contribution to the preservation of some of the most ancient and sacred kitchen traditions in the country and the Mexican people, like it or not, are forever endebted to her researching talents and her determination to preserve recipes and ingredients that would have been otherwise long forgotten and/or lost. 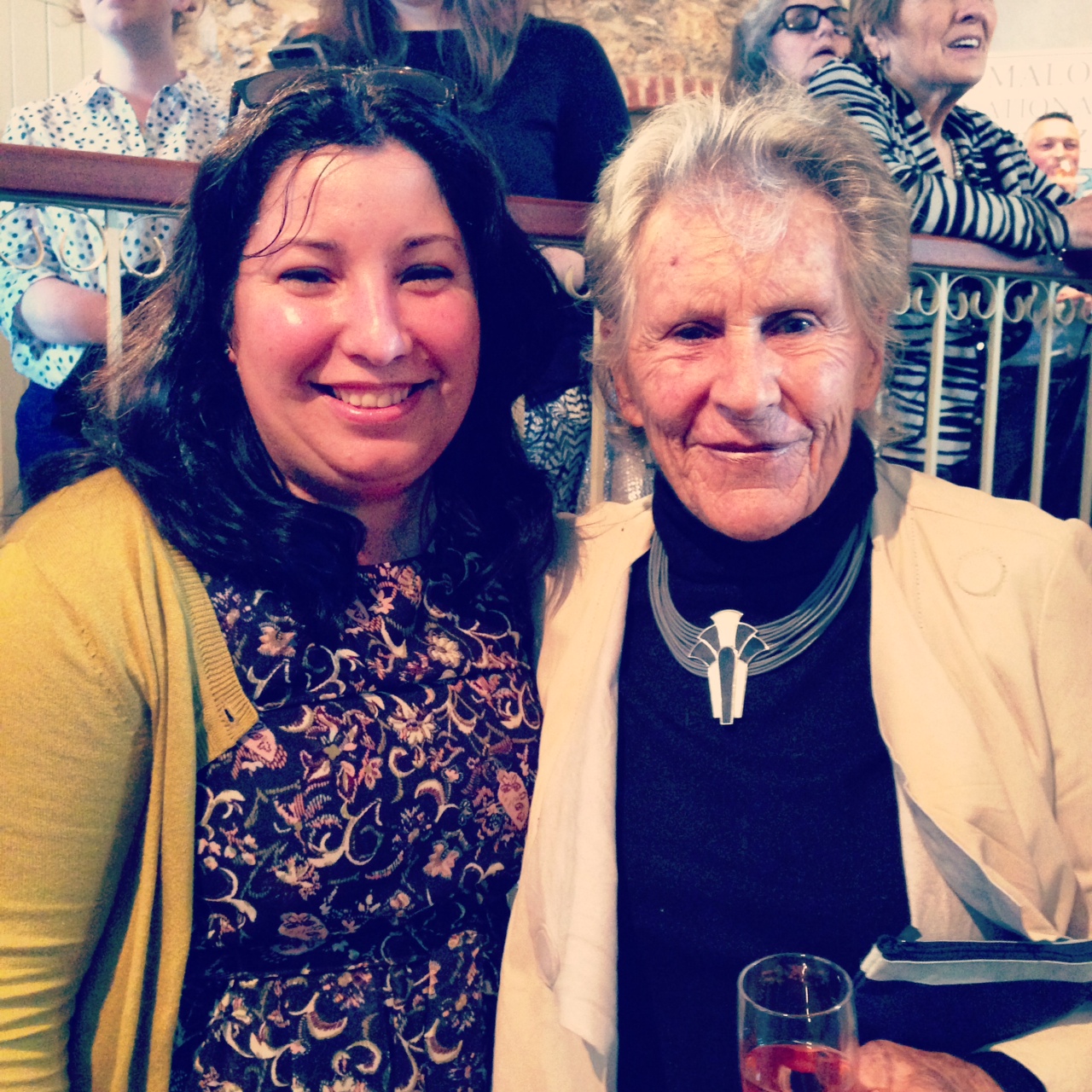 This thinly-framed, 91 year old woman, with a surprisingly youthful spring to her step, walked into the venue on Friday evening wearing leather pants, a black turtleneck top with a khaki jacket and the most stunning Mexican necklace. She went straight to the champaigne and mingled with people before the opening speeches. When I saw her I felt so overwhelmed. Here she was, a woman I greatly admire, not only for the enormous contribution to Mexican Food, but also because of her stubborn determination to be treated as an equal. A woman who survived the Mexican macho culture and paved the way for women like me to follow.

A woman who fought and continues fighting for the rights of small farmers and for the necessity to preserve and protect the incredibly rich food heritage my country has. I was jittery! I approached her and spoke to her in Spanish, which she speaks fluently. We spoke for about 10 minutes about Mexico, my life in Ireland, ingredients and sustainability. Sometimes she seemed to forget which language she was using and mixed the two, I totally relate to that. She seemed to like me as she agreed to a photo with me. 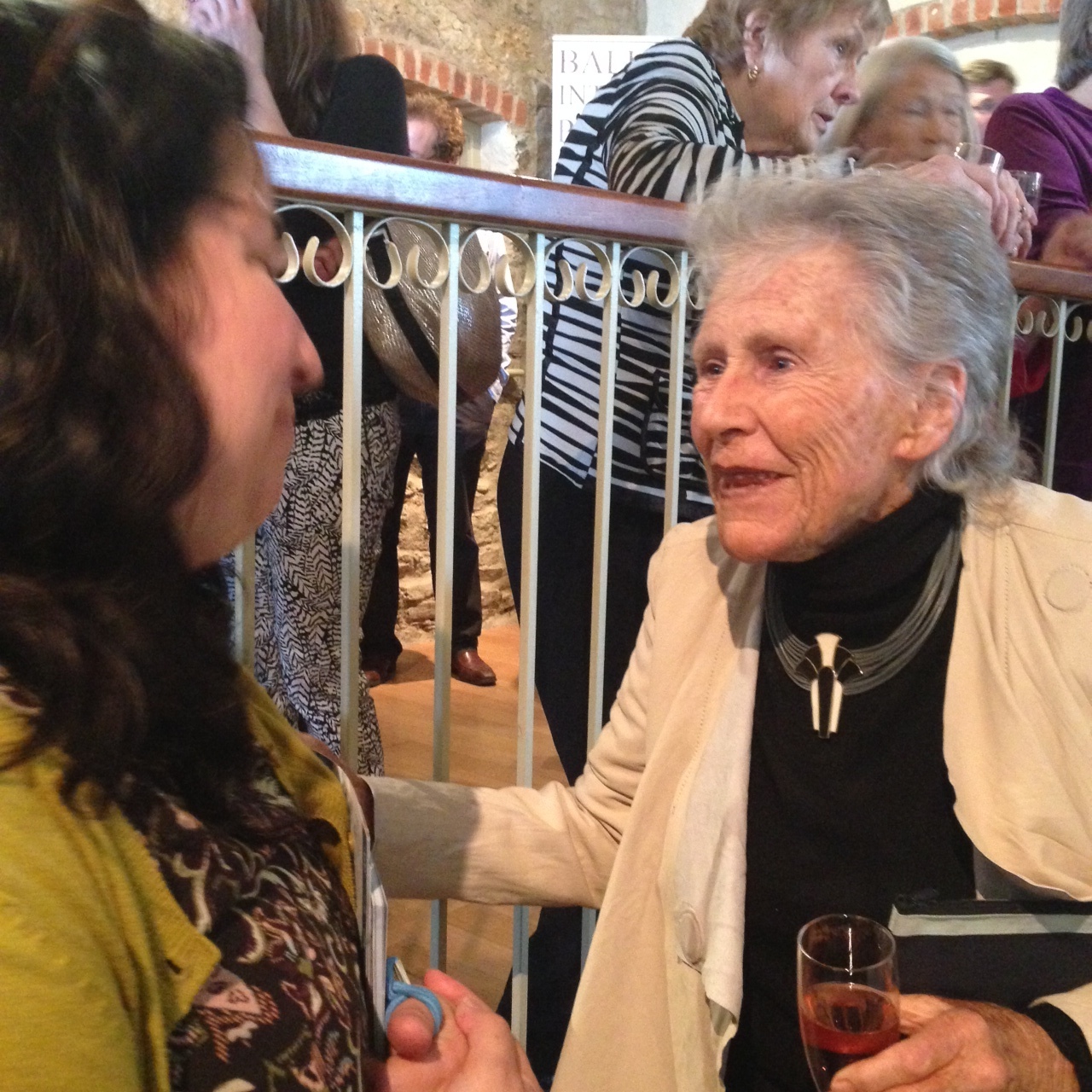 To say that I was beyond myself is not an exaggeration. I was like a 15 year old girl at a One Direction concert (minus the screaming of course, she probably would have slapped me!). Saturday morning couldn't come quick enough. I was so excited, I couldn't sleep. When we got to Ballymaloe Cookery School, we were told Diana had requested no photography or recording of any kind was to be allowed during the demo. I was disappointed, but didn't really care. The room was packed, but I managed to secure front seats as I was there so early! Nobody could wipe the smile off my face.

She walked into the demo kitchen looking fabulous again. The demo was the funniest and most interesting thing I have seen! I knew off her no-nonsense reputation and her tendency to lash out at the minor provocation. I was at the receiving end for whispering an answer to a women sitting next to me, but she forgave me quickly. She was not so forgiving with a guy at the back who asked a question and then ignored her answer: 'You only have me for another half hour you know? You have your neighbour for the rest of your life!'- she pointed out with her wonderfully scornful British accent. 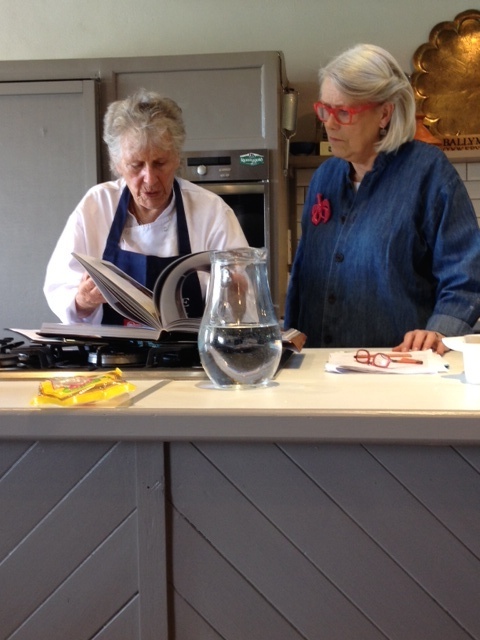 Under her strict supervision and with the soothing commentary of Darina Allen every now and then, Doña Diana cooked seven dishes. All stunning, flavoursome and uncommon: 'If I see another book about Tamales, I'll scream' - she told us. When talking about chillis, she said - 'If a book tells you to deseed a chilli, through the book away' - I nearly jumped off my chair and erupted in sudden applauce (only managed a low 'yes!!' as I was afraid for my life she'd scold me again!)  Anybody who has seen me knows how I feel about the same subject! She also said salt should be added during the cooking process not at the end and insisted that ALL dishes were to be served in real plates with real cutlery as she hates disposable stuff - it is ruining the planet!- she remarked - (don't ever mention tinfoil in her presence, she hates the stuff!!). She took questions with a mixture of disdain and contempt (she doesn't like stupid questions) but answered them all nevertheless. She signed books and chatted with me a little longer. 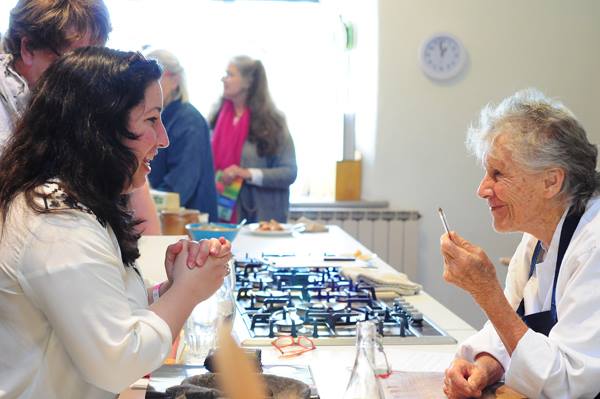 Image courtesy of Aoife Cox from The Daily Spud

On Sunday she gave a free talk. 9:30 am at the cookery school. The room was packed to the rim as word had gotten out about her witty lashing tongue. She stood up at the top of the room proud and surprised that so many people had gotten out of bed on a rainy morning to hear her talking. She spent the next hour and a half talking about how she ended up in Mexico, the food of Mexico, her beautiful book Oaxaca al Gusto: and Infinite Gastronomy, her photography skills and how much, again, she hates the fact that Mexicans are not fighting to preserve their food heritage.

I asked her loads of questions and she was very engaging and funny. She apologised to me for saying that the food of the North of Mexico was not as good as the rest of the country's (with the exception of our tamales nortenos, which she said were delicious and 'muy elegantes') and proceeded to tells us about the different types of ingredients found in the regions of Mexico. It felt to me like there was nobody else in the room, I swear to God, if George Clooney had walked in the room, had sat down and started talking to me I would have shush him quickly!!! I was a little teary eyed when it was time to say goodbye and everybody in the room would have gladly sat there for another hour listening to her adventurous stories. 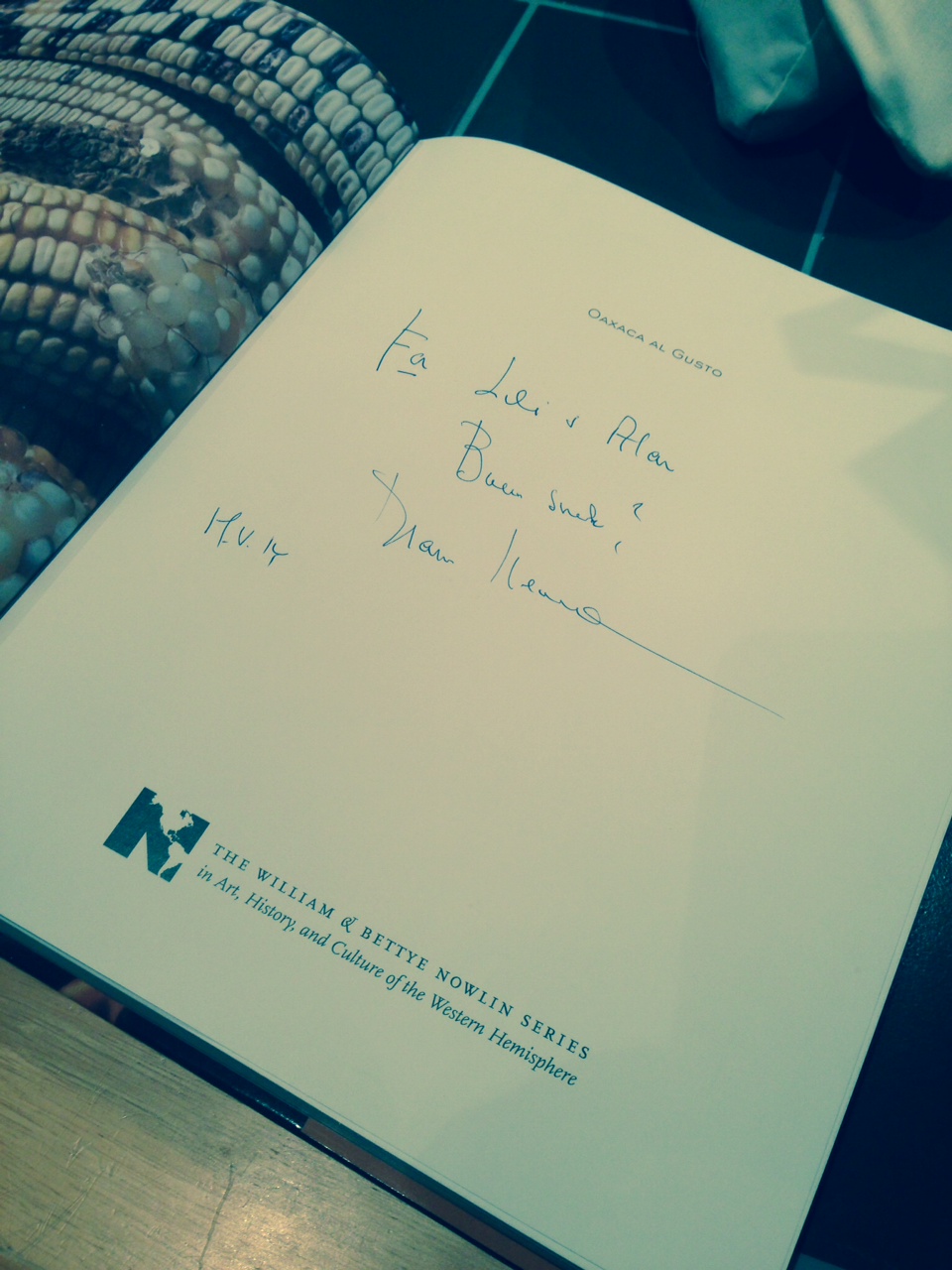 After spending the weekend around her, I ended up so in love with this intolerant woman! She made us laugh so much. I was in awe of her energy, her passion and her dedication for what must feel like a lost cause. I felt inspired, vindicated and challenged to be better.  She was passionate, witty, irreverent, funny, challenging, defiant and tough as old boots. She was a touch rude at times - 'I'm 91 I've earned it' - but she did it all with a twinkle in her surprisingly young-looking eyes. I deeply admire the power of her convictions. After 11 groundbreaking books, at 91 years of age, she is planning the launch of her latest book and her Quinta Diana is in the process of being transformed into the Diana Kennedy Centre, Quinta Diana foundation with the aim of providing a way to protect and preserve the culinary traditions of Mexico.

At a different talk, Tom Parker Bowles said that we should all have an opinion when writing about food - For God's sake have an opinion - he said - it doesn't matter if it's right or wrong, you just have to have one!- that resonated with me. Diana Kennedy has an opinion and she is not afraid of stating it, in fact, she shouted it from the rooftops of Ballymaloe. What an honour and what a legend, for as long as I live, I will treasure my little encounter with this incredible woman.